Automation of Auxiliary Processes is the Key to the Smart Factory 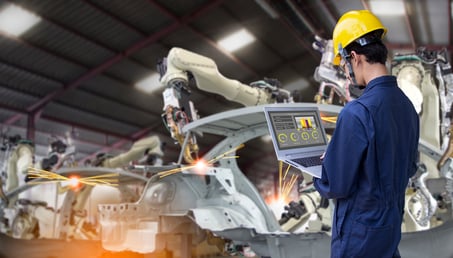 Market demand is continuously evolving, which is forcing companies to reorganize their existing production strategies. Based on traditional automation systems, plants have looked for ways to reduce downtime, organize a safe work environment using mobile automated guided vehicle (AGV) robots and collaborative robots, and take advantage of the potential of advanced analysis of data acquired within the implemented Internet of Things (IoT) ecosystem.

For the best possible management of real-time manufacturing process, it is crucial to enhance the competence of the IoT ecosystem in the management of auxiliary processes and company resources. According to the concept of Industry 4.0 all production processes should be integrated, monitored and analyzed to achieve the best management based on the actual state of the factory. In this way, technology can inform people of the need for repairs and anticipate possible breakdowns, making downtime  less likely.

In an ideal scenario, a production line is implemented with the use of virtual commissioning technology, which allows to test software, simulate mechanics and process automation, and as a result to detect design errors – in the virtual sphere. This shortens the time of actual start-up, especially of large production lines.

At the same time, system suppliers can integrate the best digital transformation technologies according to the needs of the plant. Individual approaches to digitalization of auxiliary processes will depend on available market technologies. A good example is the evolution of the competence of AGV robots. These autonomous vehicles are supported by natural navigation and operate safely with plant staff.

The automation of key production processes will soon cease to be sufficient. Manufacturers seek further areas of optimization, but certain conditions and challenges exist. On the one hand, the consumer market is hungry for new products. Consumers expect customization, which is forcing production lines to create shorter product runs. The expected competences and requirements of employees also is growing because of this growing consumer demand.

Factories have faced a shortage of qualified workforce in selected areas. The automation and robotization of processes, where a human being can be replaced by a machine, is a business need for manufacturers. It is necessary to extend the scope of automation with additional processes, which is what the radical automation concept says.

The approach to the automation process should be holistic and include all business-relevant areas and resources of the manufacturing company, which will be combined into one coherent communication ecosystem. This should be treated in terms of automation of processes, which until now have been overlooked or postponed. It should be emphasized the goal of process improvement is not to exclude people.

Intelligent production assumes cooperation between a human and a robot, and optimization of only those processes in which it is justified: where a human is not needed or will not want to be needed in the future.

Moreover, as Ben Reynolds notes in his book “The Coming Revolution: Capitalism in the 21st Century:” “(…) automation does not always lead to a decrease in demand for [hu]manpower (…)”. History shows there are certain structural causes for radical automation. We may also have to accept we will never have enough skilled production workers available within the workforce to keep pace with expanding processes.

A human being is supposed to be an added value thanks to his unique competencies. A plant’s staff is irreplaceable in those areas of production and logistics where the process’ complexity makes implementing traditional automation economically unjustified and difficult to accept temporarily or when we talk about supervisory processes. In addition, increasing personnel competencies, with the simultaneous popularization of robotics, allow manufacturers to better utilize the potential of employees in other areas.

In this perspective, a holistic, radical approach to automation should be understood in two ways. First of all, it is a radical increase in involvement in process automation, exceeding the company’s expectations. It also is a radically expanded sense of which production and auxiliary processes can be under automation.

It Pays to Leave a Comfort Zone

Excellence in traditional automation has led to the development of radical automation technology with the use of the Internet of Things (IoT) solutions. According to the International Data Corp. (IDC), today’s IoT market in Central and Eastern Europe is valued at more than $11 billion. However, as with any new direction, the approach to the digitalization of subsequent processes in plants is considered in terms of profit and risk.

Factories need to see their way out of the comfort zone where, based on the automation of key processes, a certain level of efficiency has been achieved that meets current demand, or deficiencies are not yet severe enough to invest in new areas. The development of the IoT ecosystem, based on the automation of auxiliary processes, will determine the long-term development of the organization and the growth of its position on the market.

The new quality of service in the area of automation of internal logistics processes is visible in the case of autonomous AGVs, which in the area of navigation are adapted to the needs of the plant. Cognitive analysis enables the systems to make independent decisions in real time and adapt production processes to the existing situation, without a participation of an operator.

These self-propelled robots can cooperate with the system of internal location in the space of production halls, which provides a full picture of the current status of moving objects, which allows for a very accurate analysis of traffic and further optimizations related to, among others, the deployment of fixed elements and the management of work of people.

Systems that increase the scope of competence are the essence of an intelligent factory. The biggest advantage, and at the same time the market expectation, is short implementation time and unprecedented flexibility and versatility of AGV robot cooperation. Moreover, the latest security systems allow for direct cooperation with people, which means there is no need to separate closed zones in production or warehouse areas. 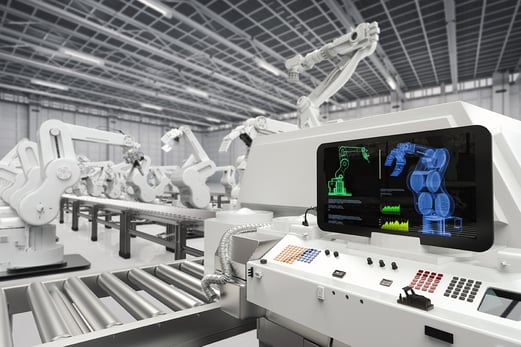 Companies striving to improve the production chain with digitalization of new areas, but also with the use of new solutions, can be improved and extended. The consumer market is mature. New expectations and customer habits have pushed factories in the direction where not only quality and speed of production are important, but also flexible production process management, as manufacturers strive to keep up with the needs of buyers.

New consumer trends are a challenge for traditional models, where the automation of key production processes has once been established, implemented and operated. A rigid supply market today leads to more constraints than development. This means the need for a new look at the implemented ecosystems of production management and the creation of new solutions such as polymorphic production. Its aim is to expand key manufacturing processes by assigning additional positions or entire production lines in virtual and real space.

In such a system, new nests can be serviced by collaborative robots and mobile AGV robots, which, in a simplified way, see the production line virtually. This is a modern approach and is crucial in the context of producing, among other things, short product run.

Technology Integrators: What to Expect From Them?

In the latest report “IoT in the Polish economy,” commissioned by The Ministry of Digital Affairs, market experts predict the manufacturing industry will become one of the sectors that will use the IoT technologies to the greatest extent. Acquisition and intelligent analysis of data in factories allows automation and synchronization of work, as well as reduction of repair costs by preventing possible failures and increasing security. This increases the efficiency and profitability of the whole institution.

It is important for the manufacturer to have a well-defined business or operational goal, which can be shared with an IoT and Big Data partner. From here, the company will create an ecosystem of information exchange between the plant’s systems and its environment. Although there are many ways of organizing such cooperation – from consulting and technical support – it is the model of responsibility for the process responsibility as a service (PRaaS), where the parties implement common key performance indicators (KPIs), which becomes the most business-desired model of cooperation.

What does your company see for its Smart Factory and what steps are they taking to implement it?

Jerzy Greblicki is a director of Radical Automation branch and an Industry 4.0 Management Adviser in the company AIUT Sp. z o.o., one of the largest European system integrators for the industry. www.aiut.com This was posted on Control Engineering Poland Jan. 8 and edited for Control Engineering North American edition.

To learn more about Radwell

For a behind-the-scenes look at Radwell