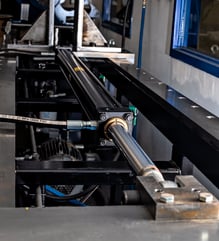 Hydraulics has played a significant role in creating valuable devices throughout history. The power generated from water has been improving industrial performances and creating useful systems. Find out more about how hydraulics work here. Let’s take a look at hydraulics from Ancient Rome through the modern era.

The Bramah Press was one of the first devices to be powered by hydraulics. This system allows for a pressurized fluid to power a given machine through science and engineering.

Hydraulics have been around since the Egyptians and the Babylonians. However, the critical development and science behind the law of fluid motions started with the Greeks and was implemented by the Romans. Ancient Rome is known for its use and development of various hydraulic applications during its beginnings. An array of different hydraulic practices were manufactured in its infancy

including aqueducts, watermills, and public water supplies systems. One of the most notable accomplishments was the invention of hydraulic mining. The Romans used hydraulic mining to excavate underground deposits. Much later it was successfully used for extracting gold.  This was one of those applications that was heavily relied upon at the time. It stood the test of time as it was still used in the United States during the California Gold Rush of 1848.

The Romans were also one of the first to use a siphon. This is a device that is able to move liquid upwards from one area to another by atmospheric pressure. Siphons were then improved, which allowed millions of gallons of water to be brought to different cities. This was an impressive feat that the Romans were able to accomplish.  This also led to the creation of plumbing systems for the public, which was another huge improvement.

Industrialization and the Modern Era

Looking towards the beginning of the modern era, industrialized was ramping up manufacturing processes more than ever before. Harry Franklin Vickers, often dubbed the “Father of Industrial Hydraulics”, manufactured numerous new and innovative hydraulic applications. His first contribution regarding hydraulics was the power steering wheel and later continued that path, which grows the hydraulic industry. His most notable work revolved around his invention, the Balanced Vane Pump. Much of his work helped spawn more innovation in the fluid power industry. A later adaption was in 1922, when hydraulic brakes replaced old school brakes that once relied on the pressure of the driver’s foot. Overall, Harry Vickers played an influential role in this industry, which elevated the inventions and industry additions that followed.

Today, with the advancements in electrohydraulic technology, hydraulic power is being viewed as more than just an old school operation. Hydraulics offers specific advantages that are distinct, such as its high-power density capabilities and energy efficiencies. While the future may look more towards electronic technology, there is still high demand that only hydraulics systems can provide. The concerns surrounding hydraulics were once limited by its size and environmental concerns. However, those can now be replaced with high tech mechanisms that can advance and grow the potential of hydraulics systems. The foreseeable future has great growth possibilities for hydraulics. 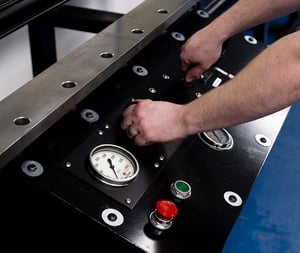 Many different forms of hydraulic power are continuing to be developed. There are many examples of industries the used hydraulics systems such as the construction industry, manufacturing, and automotive repairs. Hydraulics make construction work feasible when large amounts of ground need to be moved that would have otherwise not been possible. For the automotive industry, hydraulics are used for brakes, gears, and suspensions. Hydraulics were used in the first rendition of the power steering wheel inside vehicles. Hydraulics are still reliable and efficient systems that play a pivotal role in the automotive industry. Overall, this new age of hydraulics is becoming more optimized due to improvement in hydraulic intelligence software.

It’s important to remember to keep your hydraulic machine functioning at its optimal performance, which requires the proper regulatory maintenance. It’s remarkable to see this power still utilized evens hundred of years since its inception.  Learn more about hydraulic repair services here.

These principles that came to creation centuries ago remain in hydraulic equipment and machinery to this day. It’s incredible to see the long history surrounding hydraulics and will be even more interesting to see what the future of this industry holds.

To learn more about Radwell