Proper or no maintenance of hydraulic equipment can mean the difference between scrapping a machine at 20,000 hours or more instead of 5,000 hours. And because they often are located deep within the workings of machines, hydraulic swivels (also called rotating joints or rotating manifolds) usually receive little or no maintenance.

A well-designed hydraulic swivel should not require much maintenance. However, if the swivel is mounted in a location where it is surrounded by hoses or tubing, shortcuts may end up being taken—and maintenance improperly conducted or components compromised.

Even small pieces of debris can become lodged under a rotary seal and create cross circuit leakage. This typically poses no immediate threat but can make hydraulic control functions sluggish and rob system efficiency. Some circuits, however, cannot tolerate any leakage out of, or into, the circuit. Brakes, throttle controls, and pilot circuits will create poor machine performance if the rotary seal in the swivel is leaking for that function.

Proper maintenance includes many activities: filter changes, oil replenishment, and monitoring the health of the hydraulic components and the entire system. If hydraulic fluid can leak out, chances are, dirt and moisture can leak in.

Another concern associated with hydraulic swivels is storage. Swivels kept in inventory as spares should be stored in an upright position. When a swivel is stored on its side for long periods, the weight of a swivel can deform seals over time. Once a swivel is put into service in this condition, premature leakage and wear are likely to occur.


Hydraulic swivels often are mounted deep within the workings of a machine, such as this excavator fitted with a log grapple. A swivel mounted between the turret and track dive transmits hydraulic fluid between the rotating and non-rotating assemblies, respectively. The grapple also uses a swivel from UEA to allow continuous 360-deg. rotation for hydraulics and electrical power. 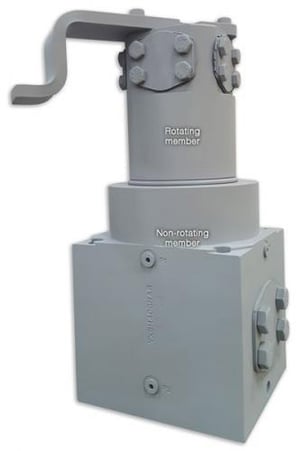 Machines often are painted after they have been assembled. Not masking off fittings and other hydraulic connections can introduce a potential source of contamination when subsequent maintenance is performed. Disconnecting a hydraulic fitting or hose coupling that has been painted after assembly can creates “paint seal.” Loosening the fitting breaks this paint seal can create thousands of hard fragments, many too small to see. Therefore, any paint seal should be removed with a wire brush before attempting to loosen the fitting.

In fact, it’s good practice to clean the area around the connection interface before attempting to loosen any fitting. Also make sure wrenches and other tools are clean to reduce the likelihood of introducing contaminants from them.

A swivel designed for hydraulic service has no special coating on the internal surface. If the hydraulic system is left open, or if moisture somehow gets into the system, rust can form. Rust usually poses no serious threat if it is light surface rust and not on an area in contact with seals. However, if the rust becomes thick enough and starts to creep into the sealing area, the swivel can begin to leak.

When a hose must be removed from the swivel, a little forethought can help prevent complications later. Removing a hose from a swivel will cause oil to leak from the open fitting or port. Having a plastic plug and cap of the right size and thread configuration will help minimize leakage while also keeping contaminants from entering the hydraulic system. Once the line is cracked open, quickly unscrew the fitting; screw a plug into the open port on the hydraulic swivel and screw a cap onto the end of the hose end.

Proper planning—such as obtaining the tools needed; cleaning the area, caps, and plugs used; and mapping out the procedure—can all help the maintenance procedure go more smoothly and keep contaminants out of the system.

Hydraulic swivels often are configured to specific machines. They come in a variety of shapes and sizes to transmit pressurized hydraulic fluid from stationary to rotating machine elements and vice versa.

Swivels are oftentimes quite large, weighing up to hundreds of pounds. They are also usually installed in tight, awkward areas of the machine. The initial assembly of the machine often allows personnel to place the swivel in position prior to installing a boom, support members, or other large structures. Therefore, it can be a daunting task for a field technician to remove the swivel after a machine has been assembled.

The field technicians often are ill-equipped or unprepared for removing the swivel, so they may take shortcuts. One common shortcut we seen is when a swivel needs to be removed from a machine. Bolts holding the swivel in place are loosened and removed, then the technician lets the swivel drop to the ground. The technician then drags it far enough to an open area so a service truck crane can pick it up.

Unfortunately, this practice routinely happens before open ports on the swivel have been plugged. The result is a swivel severely contaminated with, gravel, dirt, and any other material at the work site.

For a behind the scenes look at Radwell