What is a Pneumatic Cylinder? 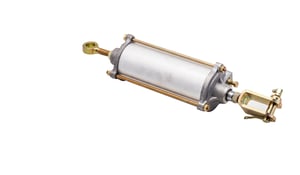 A Pneumatic Cylinder is a mechanical device that takes the power of compressed air to produce force and motion, in a linear fashion. Pneumatic cylinders can be divided into a variety of types. There are cylinders with piston rods, rod less cylinders, swivel cylinders, tandem and multi-position cylinders, stopper cylinders, clamping cylinders, drives with linear guide, and bellows and diaphragm cylinders.

The most common and well known out of the above stated pneumatic cylinders are cylinders with piston rods. The two most common cylinders with piston rods are single acting cylinders (SAC) and double acting cylinders (DAC). Both share a similar makeup; cylinder barrel, bearing cap, end cap, piston, and piston rod are the key components that make up both a SAC and DAC. A pneumatic cylinder isn’t made up of only those 5 parts. There are seals, bearings, guiding bands, permanent magnets and many more, but these five as I stated are the KEY parts. 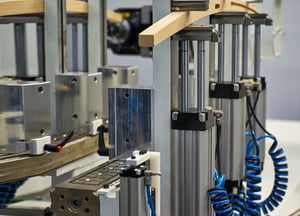 Along with the piston, bearing caps find themselves with multiple duties. They close the cylinder barrel, are the source for an air connection, and form a bearing and sealing point for the piston rod. The bearing cap aides the cylinders opening. Therefore, there has to be something that helps it close. That is what the end cap is for. Located on the opposite side, the end cap closes the cylinder.

What do pneumatic cylinders do and how do they work? A compressor sends compressed air into a cavity at one end of the cylinder. As that compressed air enters the cavity, the piston is forced to move the piston rod to perform its desired function. Depending upon whether your pneumatic cylinder is SAC or DAC,, your piston rod can fall back into position through releasing the air naturally and a spring mechanic aiding its return to position, or a directional valve can switch and direct air into another cavity at the opposite end of the piston. That is what separates a SAC from a DAC; the way in which the piston rod is controlled. The single acting cylinder is the one in which the piston rod returns to its original position through naturally releasing the air and allowing a spring mechanic aid it into position. The reason it has to be done this way is due to the SAC only having one compressed air connection. Through one solenoid valve compressed air is pressed into the back of the piston. Seeking the easiest way to escape, the compressed air exerts a large amount of force on the face of the piston. The force on the face of the piston causes the piston rod to perform its function. After the functions are performed, the operator CAREFULLY releases the air from the cavity which allows the spring to aid the piston rod back into its starting position. 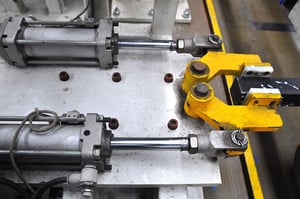 Single acting cylinders have their advantages. Defined position in the event of a power failure, reduced air consumption, and easy actuation via 3/2-way valve are the most common advantages. However, with its advantages comes its disadvantages. The cylinder has a longer construction length, spring-dependent stroke length limits the maximum stroke length, force is only built up in one direction, force is reduced by the spring force, and there is no constant force. These disadvantages are why most users find the double acting cylinders the better of the two cylinders.

Double acting cylinders use valves to inject two different alternating streams of compressed air. These two alternating air streams allow for the force to be delivered in an advancing manor and retracting manor. Just as the SAC operates in the beginning so does the DAC. The DAC sends compressed air into one cavity through 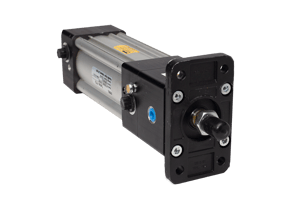 Advantages of a DAC; they have the capability to keep up a constant force, force can be built up in both directions, and its strokes have several meter possibilities. Downfalls are few but important to note. More compressed air will be needed due to more frequent and forceful movement taking place. The DAC has no defined position, unlike the SAC, which could in turn cost you in the event of compressed air failure.

There is an overall reason for the perception that the DAC is more valuable. This is because every advantage SAC’s have over DAC’s is because of the SAC’s downfall. This might seem a bit confusing but here’s an explanation. The SAC is able to stay in one defined position and the DAC has no defined position. But the reason for this is because the SAC only moves in one direction while the DAC moves in both directions. This ability to move in both directions would be a greater advantage over the ability to stay in one defined position. The advantage or disadvantage actually lies in what type of function is needed from the cylinder.

Pneumatic cylinders are utilized in a variety of different applications. The most common of these applications is factory automation systems. With its most popular accessory being mounting capabilities, positioning, moving, picking and placing materials and packages in a manufacturing facility will likely all be done by a pneumatic cylinder. Industries such as agricultural, amusement parks, automobile manufacturers, and food packaging all have pneumatic cylinders to aid and operate their automation systems.