What is a Proportional Valve?

In the industrial, engineering, manufacturing and scientific industries, valves serve multiple purposes. Their main purpose, however, is to control a specific medium flow through a system. Typically, valves may be used to start, stop, or throttle the flow to ensure safe and efficient operation of the process. Valves come in many different types and arguably the most dependable, cost-effective, and consistent control at relatively low flow rates are proportional control valves.

A proportional valve is a valve that produces an output that is proportional to an electronically controlled input. How it works can be a bit technical. It starts with a source that provides an electrical current. This source can be a machine operated potentiometer, a preset potentiometer, a joystick, or a PLC. Once the electrical current is provided, its input will regulate an electrical signal to the valve’s solenoid coil. The solenoid coil will then convert the electrical input into a mechanical force. This mechanical force will allow for movement by the armature, which in turn will input a force to the valve spool in a flow control, pressure reducing, or directional control fashion.

Proportional pressure control valves allow for machines to properly control or maintain the pressure applied or the pressure relieved. This action is undertaken solely by changing throttling cross-sections with the aid of mechanical, electrical, or hydraulic adjustment movements. Relieving the pressure with a proportional valve is used when a fluid system has too much pressure. With the design to open gradually as pressure increases or close when the system falls below the set pressure. 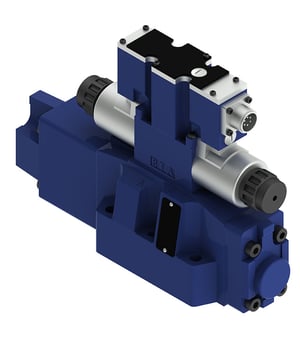 Each one of these types of proportional control valves perform different outputs. But each one has similar factors. One being proportional valve coils are arguably their most important feature. Operating on dc current and varying voltages, this allows the valves to produce a varying force to shift the spool. Theses coils normally demand an electrical input that is much stronger then the general electrical power provided. This results in the input current needing to be amplified. This function can be fulfilled by an amplifier card being mounted on the valve, commonly termed OBE (On Board Electronics).

Controlling flow is a key part of many industries. If it’s gas, air, steam, or any form of fluid, valves will play an important role in controlling those mediums. Proportional valves are just one of many valves that can benefit a company. If the pressure and flow control of machinery needs to be consistent proportional control valves can deliver.