What is a Solenoid Valve?

Controlling the flow and pressure of liquids and gases is an important part of many industries. Industrial, engineering, and manufacturing facilities rely on this capability. The main component that allows them the ability to do so are valves. Valves can vary in size, design, function and operation. But all have the purpose to control flow and pressure of liquids and gases. One of the most common and frequently used valves are solenoid valves.

Solenoid valves are used to regulate movement of gas or liquid in a system. They are tasked with the shutting off, releasing, dosing, distributing or even mixing fluids. Therefore, they are used wherever fluid flow must be controlled automatically. How they operate is by controlling the flow of the liquids or gases in a positive, full-closed or fully-open mode. The function involves either opening or closing an orifice in a valve body, which either allows or prevents flow through the valve. A plunger opens or closes the orifice by raising or lowering within a sleeve tube by energizing the coil. 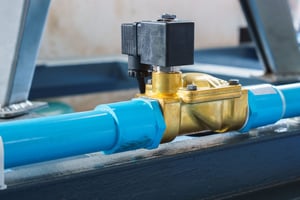 All solenoid valves, no matter the design, are specified to be one of two general types. These two types are direct acting solenoid valves and pilot operated solenoid valves. Direct acting valves operate by a coil magnetically opening the valve in a direct action, lifting the shaft and the seat of the valve without depending on outside pressure. Pilot operated valves operate by the plunger opening the pilot orifice while built-up pressure causes the valves to open and close. The main difference between the two are direct-acting solenoid valves have a direct connection with the opening and closing armature, whereas pilot operated valves employ the use of the process fluid to assist in piloting the operation of the valve.

Both types of solenoid valves consist of two basic parts; the solenoid attachment and the actual valve. Depending upon how many openings the valve has, a direct acting or pilot operate solenoid valve can be further broken down into a two-way valve, three-way valve, or four-way valve.

A two-way valve is the most basic solenoid valve. Referred to as a two-way valve due to having one inlet port and one outlet port. The two-way valve is used to either allow fluid flow in or to shut off the fluid flow. Depending upon how it is used, it can be specified as either “normally open” or “normally closed” in its operation. With a normally open valve, the valve remains open until some type of current is applied to close the valve. A normally closed works in the opposite fashion, remaining closed until a power source causes its open.

Three-way valves come with three ports. Normally including three pipe connections hence their name and two orifices. When one orifice is open, the other is closed and vice versa. They are commonly used to alternately apply pressure to an exhaust pressure from a valve actuator or a single acting cylinder.

Four-way valves can have four or more port connections. Four-way valves are commonly used with a dual acting cylinder or actuator. In this version, half of the port connections supply pressure, and the remaining connections provide exhaust pressure. This provides a positive two directional action. They can be used instead of positioners to provide on/off operation of double-acting valves. 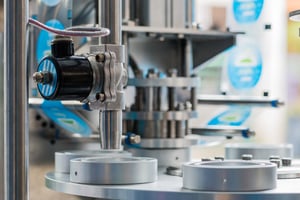 These valves have their different uses. But since their primary objective is similar, many of them can be found operating similar applications for multiple industries. The agriculture industry has a variety of uses for solenoid valves. They are a key component to irrigation and spraying devices used to water crops and keep them safe from pests. They also help regulate gas and water flow devices in the boiler/heat industry. A wide variety of applications for the medical industry also use these valves. Hospital beds, operating tables, tissue analyzers, dialysis equipment, blood pressure cuffs, and chemical cleaning equipment all make use of solenoid valves. The food service industry uses them in their dispensers, lifting, conveying, and refrigeration systems. Finally, manufacturing and construction use them for welding/soldering, compressors, vacuum pumps, chemical processing, pulp and paper processing, and dust collectors.