Will A Robot Take Your Job? 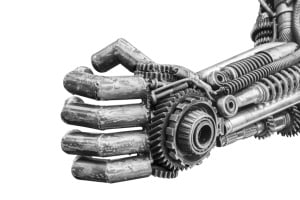 As automation capability continues to grow and strengthen in the workplace, many are wondering if humans will be left out in the cold when it comes to employment. It seems that people and experts sit on  both sides of the fence in this argument. Some believe, with absolute certainty, that robots will take over up to 30% of jobs currently performed by humans within the next ten years. Others feel it is unlikely that robots will be able to evolve quickly enough to emulate humans in the most important way: our ability to respond to other humans. Still others believe that robots and humans will work together to make the process of manufacturing a team-oriented and more efficient exercise. Each of the view points is fairly compelling and it will be interesting to see which viewpoint holds the most merit as the decade progresses.

So, are robots kicking humans to the curb?

Since 2001, U.S. manufacturers have cut nearly 5 million manufacturing jobs and for many companies, replacing humans with automated systems was a natural progression. For U. S. manufacturing, there was no choice but to increase automation to compete in international markets. Those companies that chose not to increase automation, or couldn't afford to, have either shut down or in many cases relocated overseas. Increasing automation has presented some other benefits as well. Machines can't get injured, sue the company or call in sick. Automated "workers" provide companies with information about the manufacturing process that  companies don't  have  access to when a human completes the work assignments. Data about speed, quality and costs of completing tasks is crucial to tracking profitability through every step of the manufacturing process, regardless of the industry. 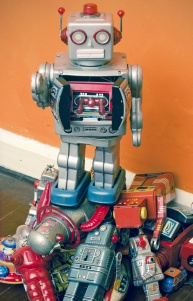 There are some who believe that this increase in automation will nearly eliminate the need for unskilled factory laborers. However the need for engineers and workers with a more advanced skill set may increase as a response to increased automation. With  technology increasing  there are some who believe that less skilled workers will have an advantage in the workplace as machinery gets "smarter" and more capable. Although there may end up being fewer employees, those that remain will have an increased skill set as compared to previous factory models before increased automation.

Artificial intelligence and robots are not just challenging blue collar jobs. They are starting to take over white collar professions as well. Jobs like reporters, online marketers,surgeons, and financial analysts are already in danger of being replaced by robots and the list is sure to increase moving forward. Even with a new generation of robots on the horizon, there will still be a need to operate the machinery as well as repair it. In many ways, the job loss will have a net zero effect as other job needs emerge as automation and robotics increase in the workplace. Industries predicted to see the highest increase in robotic installations over the next decade are transportation equipment, computer and electronic products, electrical equipment and machinery. As technology is increasing, robots are actually getting less expensive to own and operate. It is just one more reason that increasing automation through robotics will help combat rising labor costs and keep U.S. manufacturing competitive with the rest of the world.

And there are still skills that humans have that robots can't emulate. Because humans have evolved over 100,000 years, we are perceptive to visual and aural cues in a way that machines may never be able to match. When mechanization replaces   the repetitive tasks of workers, economies find other things for people to do. Our ability as humans to respond to other humans is an important skill that has evolved over time and definitely won't be an easy skill to replace. Because of this skill set, robotics may actually free up humans for more innovative projects instead of the more mundane  tasks. Our human imaginations, adaptability and decision-making skills will not only help advance automation but will keep us viable and engaged in the workplace for many years to come regardless of the level of automation.

At the heart of all of this is still the fact that, as robots make it easier for us as humans, it leaves us free to focus on what only humans can do. industrialization increased the average human lifespan and it allowed a greater percentage of humans  to take on roles that involve creativity and interactive  reasoning that they might not have had the opportunity to explore before industrialization. As the "second machine age" continues and more tasks become automated, we will  have the opportunity to continue to explore our human potential. There will always be things that differentiate us from robots and those are the things we will focus on in greater measure as the automated tasks get completed for us. Human evolution, and not just in the workplace, will be changing at a much faster pace than in the first machine age.

As humans team up with robots, more workplace efficiency will happen. If a robot can help make a human's job easier to complete, there really is no downside to teaming robots up with humans. As long as safety systems keep up with the growing power and technology of  automation, humans can only benefit from their automated "co-workers".

Obviously there are many schools of thought about which direction increased automation will take the American workplace in the near future. And each of the arguments is compelling. The one thing that remains clear in any of these viewpoints is that robotics and automation  are  sure to grow more efficient as robots become more and more capable of completing basic processes. How humans continue to fit into the manufacturing puzzle will be interesting to watch.

And remember, if your robot needs some love, care or repair we're here to help!

By Julie Basello for Radwell International