Robotics and Humans: Manufacturing Safety Practices on the Plant Floor

Using robots in manufacturing has grown exponentially over the last few years, with many manufacturers now using them to perform tasks that were previously done by human workers. The introduction of these robotic applications into the workplace presents unique safety challenges for both employers and employees.

Safety in the workplace, including the manufacturing sector, can be broken down into three different categories:

Human factors focus on ensuring that workers are physically safe at their job site.

Occupational health is about making sure workers are healthy enough for their jobs. This includes monitoring physical conditions like temperature and humidity. It also covers mental health issues like stress and fatigue.

The following article focuses more on the first two factors as it relates to workers’ safety when working alongside collaborative robots in a manufacturing facility.

Importance of Robot and Worker Safety for Manufacturers 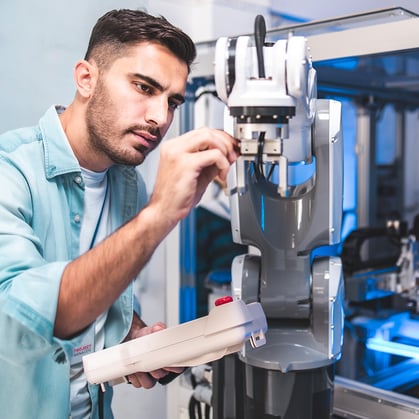 Human-robot collaboration is great, but the number of injuries and fatalities caused by accidents involving interaction with robots continues to rise.  According to the National Institute of Occupational Safety and Health (NIOSH):

These fatalities will likely increase over time because of the increasing number of conventional industrial robots being used by companies in the United States, and from the introduction of collaborative and co-existing robots, powered exoskeletons, and autonomous vehicles into the work environment.

Also, a study published by the BLS found that nearly one-third fatal injuries in the United States were machine-related causes. Similarly, the U.K.’s Health & Safety Executive reported that approximately 15% of deaths in the workplace were due to machine applications.

The potential risks associated with these accidents are significant. The cost of replacing an injured worker is high, not only financially, but also emotionally. In addition, there are legal implications as well. Depending on the type and cause of accident, the employer can be held liable for compensation payments.

To keep accidents from happening, employers need to customize the safety standards on the factory floor to make it safer for workers as they work alongside robots. 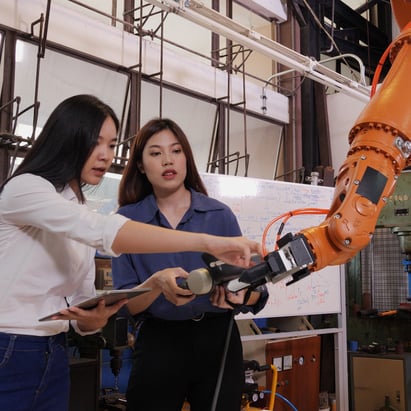 Safety in manufacturing operations is an increasingly important issue as the adoption of robotics technology continues to grow. Here are tips to keep your factory workers safe:

The first step towards ensuring that your employees are safe when working around occupational robotics is to provide them with adequate training. This includes not only those who operate the devices, but also anyone else who might come near them.

Also, workers need to know about potential hazards associated with working alongside robots. This includes knowing how the robot moves, where it goes, and how it reacts if someone steps in front of it.

Training programs should be regularly updated to reflect changes in robotic technology in your manufacturing space. For example, new software updates or hardware upgrades may require retraining.

Safety culture is an organizational culture where human workers understand their responsibilities and take ownership of their actions. The goal of a safety culture is to ensure that workers know what behaviors are acceptable and unacceptable during production operations. Workers must be trained to recognize unsafe behaviors and hazardous conditions and know who to contact when something happens.

Management must enforce its safety policies and procedures to always keep the manufacturing floor safe. Take the lead in championing your safety standards to help prevent accidents before they happen.

Do a risk assessment survey.

Ask questions, like: Do you understand how your facility operates? Are there gaps in your knowledge that could cause harm to a human worker when working with robotic technologies?

If, when going over questions, you identify hazards, develop a plan to address each hazard.

Robots should be able to detect and avoid collisions. This helps prevent injuries to human workers - and damage the robot. However, if robots don’t have such sensors, safeguards should be put in place to prevent injury. For example, you may want to install proximity sensors, light curtains, or sound alarms. You may also want to add additional guards or barriers or limit the number of people working near a robot to minimize risk of injuries.

It’s critical to ensure that the robots are properly maintained. This means keeping track of any problems with the robot and fixing them as soon as possible. Regular inspections help identify problems before they become major issues. Also, don’t forget to keep up with technology by updating your robot programming software for the latest and greatest version.

Robots are at the forefront of modern technology in manufacturing, and present several benefits, including increased productivity. They’re used for a variety of tasks, including picking items off shelves, assembling parts, and performing other repetitive tasks. However, while these applications may seem like a great idea, they can pose serious risks to workers. That’s why it’s important to have safety practices in place to protect your workers and others from injury.